ContikiMac [2] is a protocol that proposes enhancement over X-MAC. The implementation can be found in file core/net/mac/contikimac.c. Finally, LPP (Low Power Probing) is a receiver-initiated low power protocol from 2008 that was also ported to ContikiOS [3]; the code can be found in core/net/mac/lpp.c.

Each of the last three RDC protocols can be used for energy saving, since they operate in duty-cycle mode. The details of each of these protocols is outside the scope of this tutorial and can be found in the references. One important parameter that need to be defined for the operation of these protocols is the channel check rate. This parameter defines the frequency that nodes will listen to the medium to eventually receive data from their neighbors. When some activity is detected the nodes stay awake to receive data; when there is no activity the nodes go back to sleep mode for another duty-cycling period. This parameter that defines the channel check rate is NETSTACK_CONF_RDC_CHANNEL_CHECK_RATE, and it should be set to a power of 2 (2, 4, 8, 16, 32, etc.); its unit is Hz (how many times the nodes will check medium in second). Below we show how to change this parameter as well as others.

We are going to evaluate the performance of the two most famous RDC protocols in ContikiOS, the ContikiMAC and X-MAC. We want to evaluate the Packet Reception Rate (PRR), which is the percentage of received packets in an interval; and also the average duty-cycle of sensor nodes. The PRR is related to the maximum throughput the network is able to handle; with lower PRR more packets are dropped and the total amount of data that can be transfered to the sink node is small. Also, the duty-cycle impacts the average power consumption and the lifetime of nodes, since the largest energy savings are achieved when nodes are sleeping; the lower the duty-cycle the longest will be the node's lifetime.

We considered the firmware in the folder examples/ipv6/rpl-udp/, which is a firmware based on IPv6 and RPL for UDP packet transmission. In the same folder there is one simulation file called rpl-udp-powertrace.csc that is composed of 1 sink node and 30 sensor nodes and traces the energy consumption of all nodes, and also keeps track of PRR values throughout the simulation. We considered the firmwares udp-server.c and udp-client.c and reduced the data transmission interval in udl-client.c to 1 second. The line below shows where the code of udp-client.c was changed: 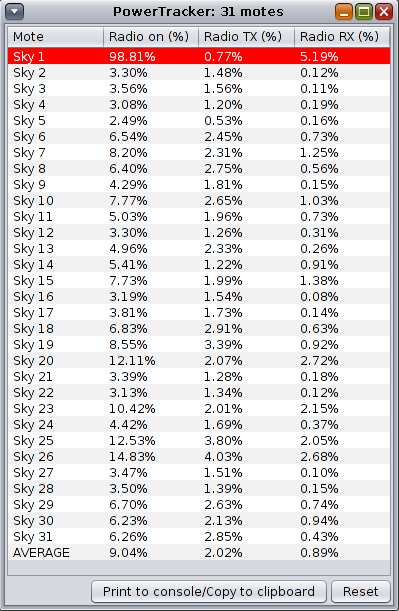 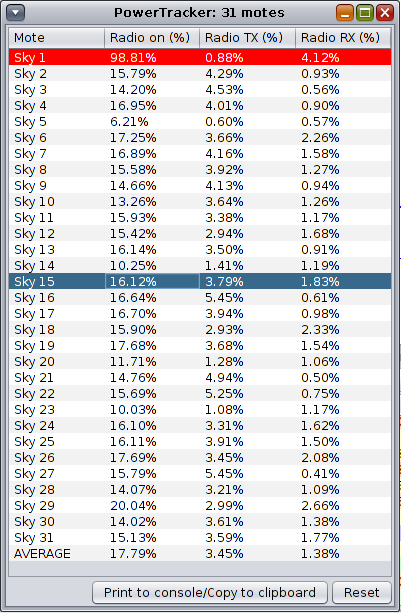 We can see that ContikiMAC reduces the average duty-cycle from 17% to 9%, which drastically impacts the energy consumption of the nodes.

The PRR statistics were also analysed for all 30 sensor nodes. The average PRR of ContikiMAC was 50.48% and the PRR of X-MAC was 30.38%. We can conclude that ContikiMAC implementation is more energy and throughput efficient than X-MAC.